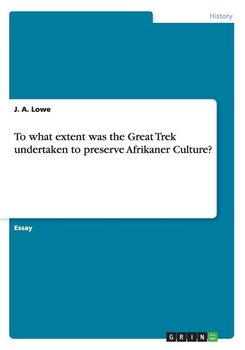 To what extent was the Great Trek undertaken to preserve Afrikaner Culture? 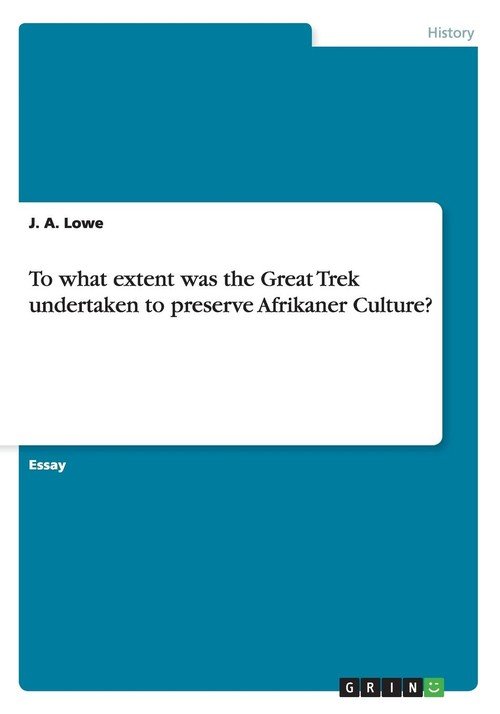 To what extent was the Great Trek undertaken to preserve Afrikaner Culture? (sewn)

Essay from the year 2014 in the subject History - Africa, grade: 2.1, University of Central Lancashire, course: Modern World History, language: English, abstract: The Great Trek of the Dutch descended Afrikaner population which began in 1838 has been described by historians such as J. Du Plessis as being one of the strangest and most moving spectacles in history; with well-to-do farmers... packing their families, and household goods into an unwieldy ox-wagon, driving their flocks and herds before them, and trekking away to the unknown. Narratives of this period of history as depicted by Afrikaner historians tend to portray the voortrekkers as united protagonists placed in a just and misfortunate situation. An exemplary figure of this form of historiography was Gustav Schoeman Preller and his works provided recognition of Afrikaner historical importance. He continued on and made the plea of: 'Let us be serious about accepting a written Afrikaans'. His works, particularly the 1920 book Piet Retief depicted the Voortrekker leader Retief and the Voortrekkers as heroes and raised the Great Trek as a definitive moment in nineteenth century nationalism. This draws upon the theory that the Great Trek was used as a means to preserve Afrikaner culture and was set upon as a form of cultural nationalism. This essay will discuss the extent to which this was the cause for the Great Trek, along with raising other reasons for why the trek began.

Właśnie zrecenzowałem To what extent was the Great Trek undertaken to preserve Afrikaner Culture?