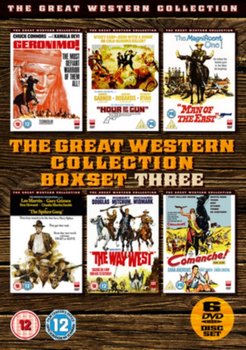 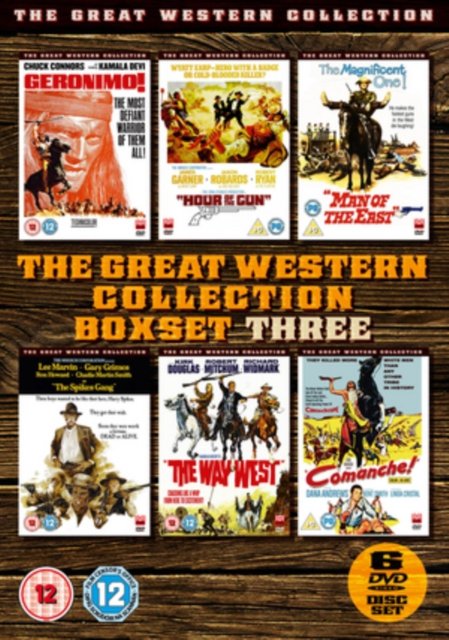 Wysyłamy w 3 tygodnie
Collection of six Westerns. In 'Geronimo' (1962) Chuck Connors stars in the title role as the Indian chief who, having reluctantly surrendered to the US forces in return for food and land, finds the white man's promises broken as their land is revoked. He leads the Apache tribe in an all-out war against the Americans, which they can never hope to win. However, as his tribe is depleted, Geronimo continues to hold his ground. 'Hour of the Gun' (1967) is a retelling of the O.K. Corral gunfight and what happened next. After taking revenge on his brothers, Wyatt Earp (James Garner), and Doc Holliday (Jason Robards), are determined to bring Ike Clanton (Robert Ryan) to justice. In 'Man of the East' (1972) Thomas Moore (Terence Hill) lives life as a maverick Englishman until he travels to the US to take over his dad's ranch. Once there he is taught how to be a 'real man' and learns how to be an expert gunfighter under the guidance of three teachers, in tribute to his late father. Will a young man who despises guns and loves bicycles be able to survive in the Wild West? In 'The Spikes Gang' (1974) outlaw Harry Spikes (Lee Marvin) is wounded in battle and is rescued, sheltered and nursed back to health by three young friends. While in recuperation, Spikes tells the boys of his many adventures over the years, and his stories inspire them to form a gang of their own and run away from home in search of excitement. After receiving some unwanted attention, however, the boys, like Spikes, are wanted dead or alive, forcing them to flee their home state of Texas into Mexico where they are reunited with their mentor. But as they plan and carry out robberies back in Texas, with Spikes as their leader, the boys begin to see a different side to their hero. In 'The Way West' (1967) senator William Tadlock (Kirk Douglas) sets out from Missouri with the help of scout Dick Summers (Robert Mitchum) to travel west where he hopes to start a new settlement with his family in Oregon. The journey is anything but pleasant for those who agreed to join the trail as Tadlock exerts his own brand of brutal justice on them as their leader. When newly-wed Johnnie Mack (Michael Witney) accidentally kills a Sioux chief's son, Tadlock orders him to be hanged, making a widow of his wife Amanda (Katherine Justice). Tadlock's brand of frontier justice sees him clash with the other travellers, culminating in a deadly climax as tensions boil over. In 'Comanche' (1956) a group from the Native American Comanche tribe attack a Mexican village and kidnap Margarita Alvarez (Linda Cristal), the daughter of a Spanish aristocrat. Indian scout Jim Read (Dana Andrews) is sent in to appease both parties and negotiate with the Comanche chief Quanah (Kent Smith). But events turn violent due to the presence of the renegade Comanche Chief Black Cloud (Henry Brandon) and government official Commissioner Ward (Lowell Gilmore).

Collection of six Westerns. In 'Geronimo' (1962) Chuck Connors stars in the title role as the Indian chief who, having reluctantly surrendered to the US forces in return for food and land, finds the ...
Udostępnij
Prezentowane dane dotyczą zamówień dostarczanych i sprzedawanych przez empik.