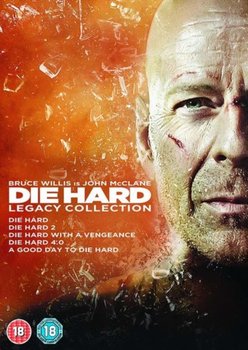 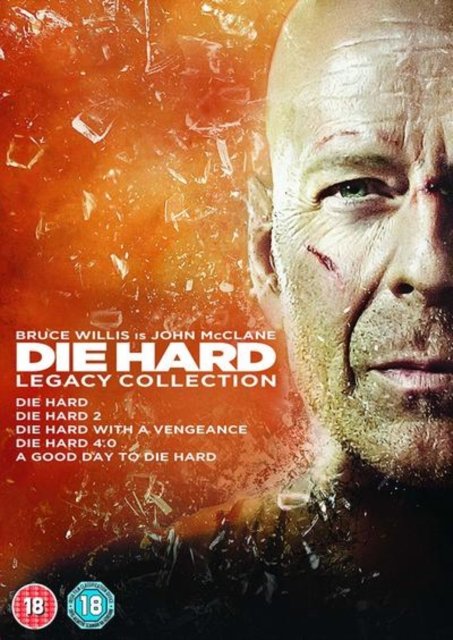 All five films from the popular 'Die Hard' franchise starring Bruce Willis. In 'Die Hard' (1988), on Christmas Eve, New York cop John McClane (Willis) is visiting his estranged wife Holly (Bonnie Bedelia) in Los Angeles, where she works. They are attending a party at Holly's high-rise office block when terrorists, led by the suave Hans Gruber (Alan Rickman), break in, taking everyone hostage. McClane manages to evade capture, however, and sets out to rescue his wife and the other prisoners. In 'Die Hard 2 - Die Harder' (1990), John McClane is again set to meet up with Holly on Christmas Eve, this time at Dulles International Airport in Washington DC. However, when terrorists take over the airport in an attempt to rescue dictator Esperanza (Franco Nero) from his incoming flight, it is up to McClane to restore order and ensure that Holly's plane lands safely. In 'Die Hard With a Vengeance' (1995), McClane becomes involved in a twisted game of Simon Says when an evil terrorist (Jeremy Irons) sends him dashing all over the city in an effort to find a series of explosive devices. Teaming up with electrician Zeus Carver (Samuel L. Jackson), McClane soon discovers that the bombs are an elaborate ruse intended to provide cover for a billion dollar bank job. 'Die Hard 4.0' (2007) finds McClane routinely asked to bring in computer hacker Matt Farrell (Justin Long) for questioning. In transit, events overtake them as they witness a full-scale cyber attack on the country's infrastructure led by mystery man Thomas Gabriel (Timothy Olyphant), who plans to systematically shut down or destroy the nation's major networks over three days. McClane and his hacker friend have to stop the mastermind before it's too late. Finally, in 'A Good Day to Die Hard' (2013), McClane travels to Russia to help out his son Jack (Jai Courtney), who, unbeknownst to his father, is an undercover CIA operative trying to stop the theft of nuclear weapons. With the Russian mafia snapping at their heels and time running out, the pair soon discover that although their approaches may differ slightly, the end result is certainly no less explosive.
Brak
ocen
5 0
4 0
3 0
2 0
1 0
Dziękujemy za dodanie recenzji