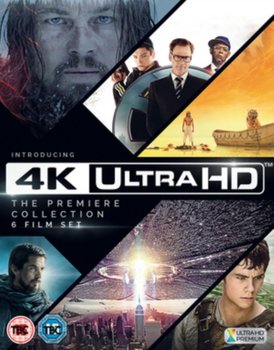 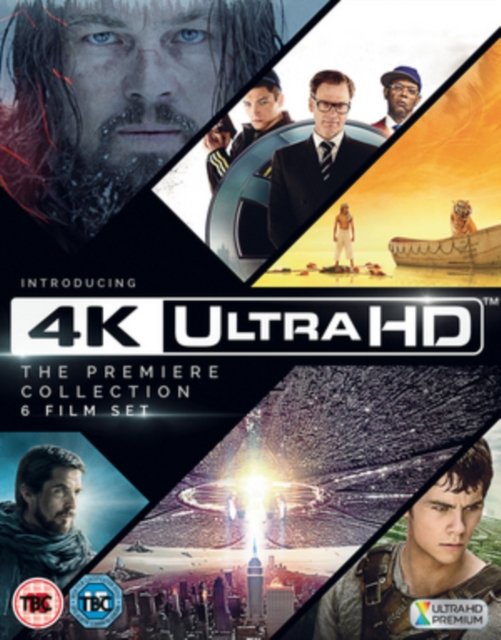 Collection of blockbuster films filmed in 4K Ultra HD. 'The Revenant' (2015) stars Leonardo DiCaprio and Tom Hardy in an epic adventure based on real events. While on an expedition in the American wilderness, explorer Hugh Glass (DiCaprio) falls victim to a near-fatal bear attack and is left for dead by the rest of his team, including his friend and confidant John Fitzgerald (Hardy). As the barely alive Glass struggles to find help and shelter in the inhospitable winter, the love and longing for his home and family, along with the thought of getting revenge on the men who left him to die, is all that gives him the strength to continue. 'Kingsman: The Secret Service' (2015) is a British action comedy starring Colin Firth and Taron Egerton. When Harry Hart (Firth), a top member of a secret spy agency in London, notices the potential in young street kid Eggsy (Egerton), he devotes his time to proving to his colleagues that the wayward youth has what it takes. With decades of experience and tricks of the trade to pass on to his protégé, has Harry got the stamina to teach the former petty criminal how to be a super spy? 'Life of Pi' (2012) stars Suraj Sharma as Pi Patel, a 16-year-old zookeeper's son from Pondicherry who finds himself stranded on a small boat in the Pacific Ocean in the company of a hyena, a zebra, an orangutan and a Bengal tiger following the shipwreck of the freighter on which he and his family were sailing for Canada. Over the course of several months Pi manages to survive on the meagre supplies of food and water he finds on the boat, and also takes up fishing, while in his half-delirious state he muses on various aspects of animal behaviour, religion and the meaning of life. 'Exodus - Gods and Kings' (2014) is a Biblical drama directed by Ridley Scott starring Christian Bale and Joel Edgerton. Moses and Rhamses (Bale and Edgerton) have lived their lives as close as brothers until a revelation from their protector Nun (Ben Kingsley) sees a rivalry emerge like nothing before. When Moses learns of a prophecy that names him as the liberating leader of Egypt, the only thing that stands in the way of his destiny is his ambitious adopted sibling Rhamses who is prepared to go to any lengths to secure his own future. In 'Independence Day' (1996), the world stands watching as a number of large spaceships are spotted hovering above planet Earth. Intrigue soon turns to terror as the aliens on board launch an all-out attack, devastating the planet's major cities. As the Earth's survivors try to come to terms with what has happened, a group of Americans including President Thomas J. Whitmore (Bill Pullman), fighter pilot Steve Hiller (Will Smith) and computer boffin David Levinson (Jeff Goldblum) decide to fight back. 'The Maze Runner' (2014) is a sci-fi action thriller directed by Wes Ball and starring Dylan O'Brien, Will Poulter and Kaya Scodelario. When Thomas (O'Brien) awakes in a service elevator with an intrigued group of boys staring at him he thinks that he is in the middle of a bad dream. As the other boys reveal to him that he has become the latest addition to their ever-expanding group and that he is trapped with them in a maze of which there is no way out, he tries to understand why he has been put there and also, ambitiously, become the one who finds a way out. As one of the boys, Gally (Poulter), tells Thomas that he and some of the others have been there for two years, Thomas starts to lose faith until, that is, a girl shows up and things begin to change.
Brak
ocen
5 0
4 0
3 0
2 0
1 0
Dziękujemy za dodanie recenzji

Collection of blockbuster films filmed in 4K Ultra HD. 'The Revenant' (2015) stars Leonardo DiCaprio and Tom Hardy in an epic adventure based on real events. While on an expedition in the American ...
Udostępnij
Prezentowane dane dotyczą zamówień dostarczanych i sprzedawanych przez . 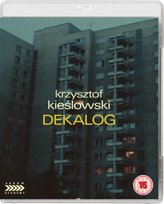