Wysyłamy w 24 godziny
Documentary about filmmaker, actor, comedian and musician Woody Allen, made as part of the long-running American Masters biography series and originally broadcast in two parts. Allen's life is chronicled from his Brooklyn childhood and early career in television and stand-up comedy through to his prolific filmmaking career. The film follows Allen over the course of a year and a half and features contributions from family, friends and stars who have worked with him including Diane Keaton, Dianne Wiest, Scarlett Johansson, Sean Penn, Mariel Hemingway and John Cusack. 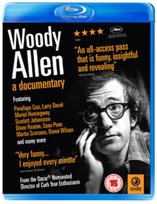