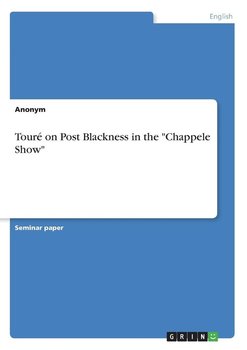 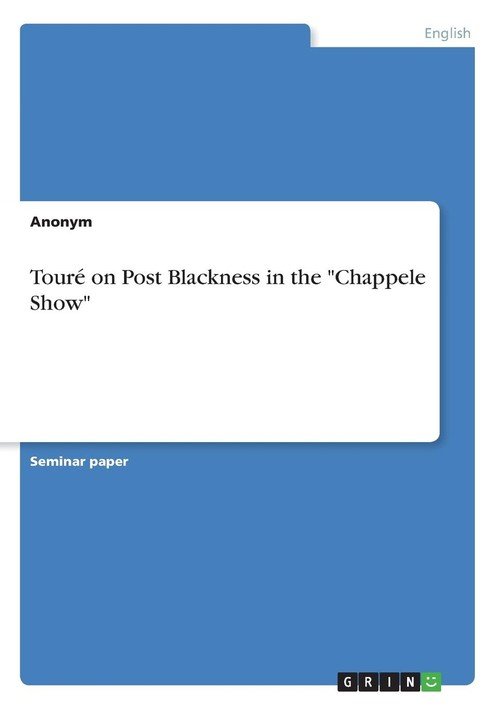 Touré on Post Blackness in the "Chappele Show" (paperback)

Wysyłamy w 4-5 dni
Seminar paper from the year 2012 in the subject American Studies - Culture and Applied Geography, University of Frankfurt (Main) (Institut für England- und Amerikatsudien), course: American Fiction After Race?, language: English, abstract: This paper looks at the aspect of Post-Blackness in the Chappelle Show. The theory Post-Blackness was made popular by Touré who published "Who's Afraid of Post-Blackness." Chapelle's Show was an American sketch comedy series viewed from 2003 to 2005. It looked at race and social relations in today's America. The show's controversy makes it worth being the subject of this paper. In the following, its aspects of Post-Blackness are being discussed. Touré's "Who's afraid of Post-Blackness? What It Means to Be Black Now" will be the main source of this paper, for it especially wants to carve out Tourè's understanding of Post-Blackness. This paper aims to portrait the different ways of Blackness visible today. This new approach of Blackness is represented best in the TV Show Chapelle's Show. Therefore two skits examined in the chapter The Rise and Fall of a Post-Black King, in Touré's book Who's afraid of Post-Blackness? What It Means to Be Black Now will be used to illustrate, why the Chapelle's Show is a post-Black TV show. This paper also tries to present the controversy, about the appreciation of Blackness itself. The following quote by Melissa Harris-Perry, who is a professor for Politics at Princeton University, tries to emphasize that she cannot really believe in the lack of acceptance, of different ways of being Black among African-Americans.

Właśnie zrecenzowałem Touré on Post Blackness in the "Chappele Show"

Why should we use Visual Teaching in Primary School? Anonym
0/5
83,99 zł
premium

The preparation of business plans and their use in monitoring insolvency triggers Anonym
0/5
98,99 zł
premium