Double bill of German dramas written and directed by Rainer Werner Fassbinder. In 'Merchant of Four Seasons' (1971) young Hans Epp (Hans Hirschmuller) decides to set up his own business as a street fruit seller in 1950s Germany after returning from serving in the French Foreign Legion. With little support from his wife Irmgard (Irm Hermann) or bourgeois family, a despondent Hans turns to alcohol to drown his sorry existence, a habit that only brings more problems into his life. 'Beware of a Holy W****' (1971) takes place during a film shoot in Spain where the cast of the movie eagerly await the arrival of their director Jeff (Lou Castel) and star (Eddie Constantine). They pass the time together in their hotel until their director eventually arrives, but the production fails to get off the ground smoothly. 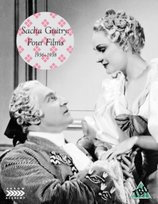 Your Vice Is a Locked Room and Only I Have the Key (brak polskiej wersji językowej) Martino Sergio
0/5
91,99 zł