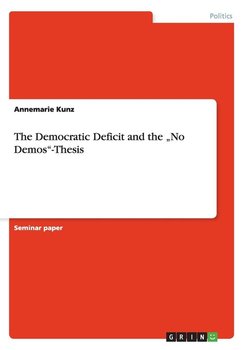 The Democratic Deficit and the „No Demos"-Thesis 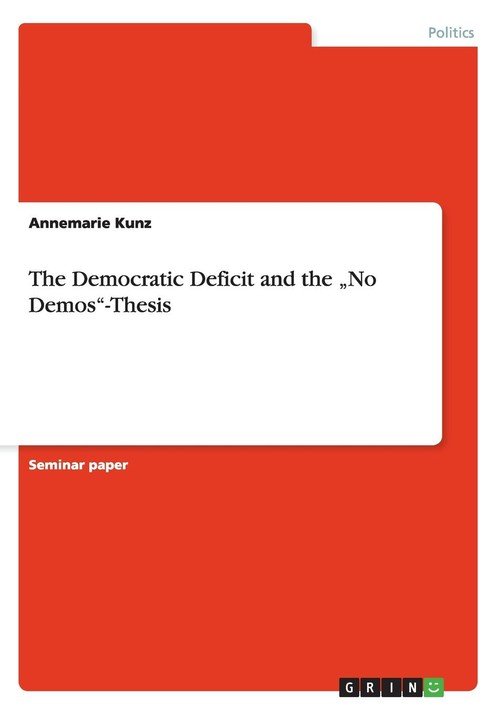 The Democratic Deficit and the „No Demos"-Thesis (sewn)

The Democratic Deficit and the „No Demos"-Thesis
Kunz Annemarie Obcojęzyczne | sewn
69,99 zł

Wysyłamy w 4-5 dni
Seminar paper from the year 2012 in the subject Politics - International Politics - Topic: European Union, grade: 2,0, University of Hamburg (Wirtschafts- und Sozialwissenschaften), language: English, abstract: Scholars have vigorously argued that a democratic deficit exists within the European Union (EU). This paper analyses the concept democratic deficit, firstly in general, defining democracy and the term democratic deficit, and providing general reasons for this perception. This paper supports the thesis of a democratic deficit for multiple reasons, including a dominating executive in the EU, a lack of accountability of EU institutions, technocratic untransparent decision-making and a European Parliament with too few powers. The focus of this paper rests on the "No Demos"-Thesis: that European democracy cannot be achieved simply because the lack of a European demos, which is the Greek word for people. Therefore, at the beginning of the second part, the term demos will be defined and the role of citizenship of the EU explained. Thereafter, reasons for the lack of a demos at EU level are contextualised: the disregard of citizens of the EU, the lack of a European-wide public discourse, the complexity of European decision-making and the distance of the EU to the average citizen. These factors result in a low and steadily decreasing voter turnout in EU elections.