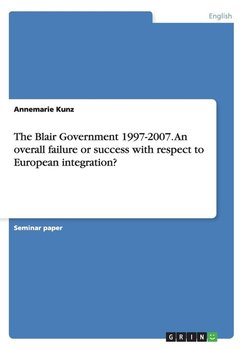 The Blair Government 1997-2007. An overall failure or success with respect to European integration? 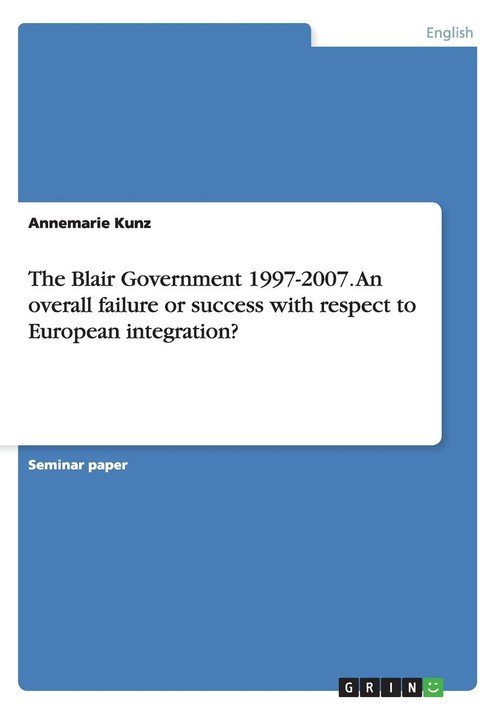 The Blair Government 1997-2007. An overall failure or success with respect to European integration? (sewn)

Seminar paper from the year 2009 in the subject English Language and Literature Studies - Culture and Applied Geography, grade: 1,0, Dresden Technical University (Anglistik), language: English, abstract: "Fog in the Channel, Continent Cut off", goes the famous headline that appeared in The Times around 1900. It perfectly captures the image of Great Britain being an island nation separate from Europe whose foreign policy is characterised by the feeling of holding a special position and distance to Europe. European integration is a very emotive issue in modern British politics concerning Britain's reluctance to be involved and to forgo its parliamentary sovereignty. This 'traditional' Euroscepticism led to Britain's reputation as 'awkward partner' which is said to be due to its long-standing empire tradition, its special relationship with the USA and its inbred island mentality.1 When in 1997, after 18 years of Conservative government, the 'New Labour' party won the majority of votes with a new party concept, a young pro-European leader and an overall more positive attitude towards Europe, this governmental change promised a turning point in British European policy. In the following term paper I am going to analyse in how far the then Prime Minister Tony Blair did succeed or fail in his mission to take Britain closer to the heart of Europe. My paper is going to start with a short portrait of the person Blair and continues to introduce his aims. An analysis of his policies follows. Finally I am going to point out his achievements and his fail or respectively success and the reasons therefore. In terms of my sources I am basically relying on articles in anthologies such as The Europeanization of British Politics edited by Ian Bache and Andrew Jordan, Länderbericht Großbritannien of Hans Kastendiek and Roland Sturm and Blair's Britain 1997-2007 of Anthony Seldon. But there were also monographs, an online source and an article of the scientific journal International Affai

Właśnie zrecenzowałem The Blair Government 1997-2007. An overall failure or success with respect to European integration?

The Democratic Deficit and the „No Demos"-Thesis Kunz Annemarie
0/5
69,99 zł