Action thriller from popular writer/director, Guy Ritchie. Jake Green (Jason Statham) is a hotshot gambler, long on audacity and short on common sense. He's rarely allowed to play in any casino these days because he's dangerous - he's a winner. One night Jake and his two older brothers, Billy (Andrew Howard) and Joe (Stephen Walters), are invited to sit in on a private game. A game that is fixed for Jake to lose to Macha (Ray Liotta), a top dog crime boss and casino owner who can't play for squat, but always wins because you just aren't allowed to lose to him. But Jake isn't afraid of Macha and not only beats him in a quick game of chance, but also takes every possible opportunity to throw insults. As Jake and his brothers leave the game, Macha puts out the order for a hit on Jake. However, a twist of fate gets Jake working for a pair of brothers, who just happen to have their own agenda for Macha. 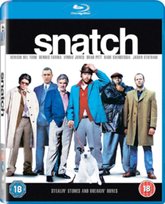