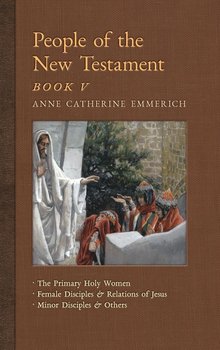 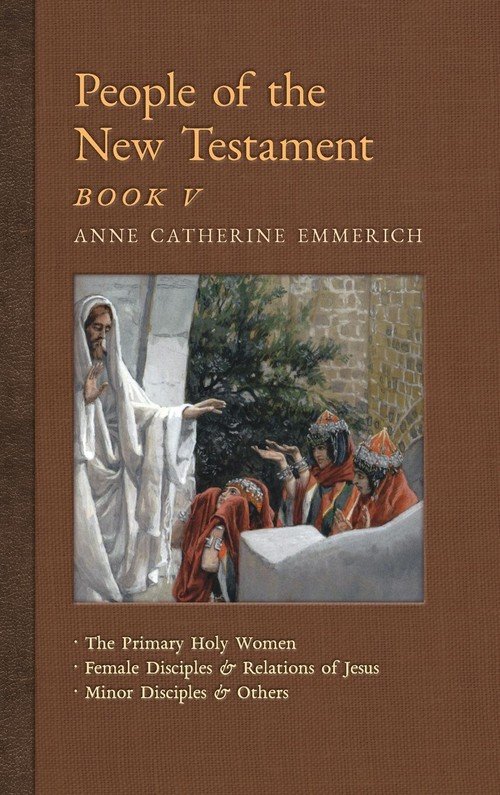 People of the New Testament (V) is the seventh volume of the long-awaited “New Light on the Visions of Anne Catherine Emmerich” series, and is specifically devoted to the many women disciples and supporters of Jesus, many unknown to history. An initial overview sets the stage regarding the primary holy women, who are presented in detail in the second part. Among these are: Mary Heli (elder sister of the Virgin Mary), Mary Cleophas (mother, or stepmother, to five of the apostles), Mary Salome (mother of John and James the Greater), Martha and her sister Mary Magdalene, Maroni (the widow of Nain), Veronica, Susanna and Salome, Mary Mark, Dinah (the Samaritan woman), and Mara the Suphanite. There follows an study of the holy women present at Christ’s death and resurrection. The third, fourth, and fifth parts present other major and minor women disciples of Jesus, as well as his female relations. Among these are Enue (the woman cured of a flow of blood), Lea, Mary of Hebron, the Syrophoenician woman, Naomi of the Temple (aunt of Lazarus), Salome of Capernaum (whom Jesus raised). Perhaps most fascinating of all is Silent Mary, an historically unknown sister of Lazarus, Martha, and Magdalene, with whom Jesus communes immediately before his baptism.

People of the New Testament (V) is the seventh volume of the long-awaited “New Light on the Visions of Anne Catherine Emmerich” series, and is specifically devoted to the many women ...
Udostępnij
Prezentowane dane dotyczą zamówień dostarczanych i sprzedawanych przez empik.

A War of Loves: The Unexpected Story of a Gay Activist Discovering Jesus Bennett David
0/5
53,33 zł