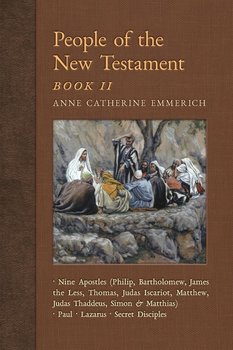 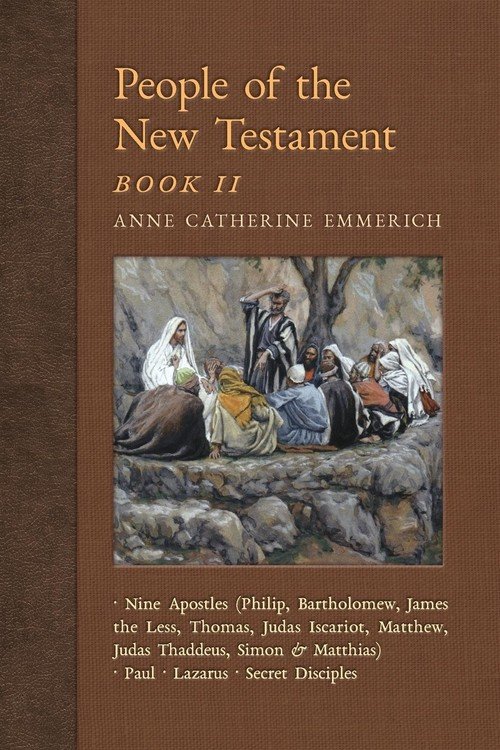 People of the New Testament (II) is the fourth volume of the long-awaited “New Light on the Visions of Anne Catherine Emmerich” series. The first part begins with the visionary’s account of nine apostles (the first four apostles are covered in the preceding volume): Philip, Bartholomew, James the Less, Thomas, Judas Iscariot, Matthew, Judas Thaddeus, Simon, and Matthias (who replaced Judas Iscariot), followed by Paul and several disciples connected with him. In many cases detailed descriptions of apostolic journeys following the Passion are given, especially in the case of Thomas’s journeys to the East. The second part, entitled “Lazarus and His Friends (The Secret Disciples),” covers Lazarus (including also his later life in France), the close friends Nicodemus and Joseph of Arimathea, Simeon of the Temple and his sons, Simon of Bethany, John Mark, and Amandor (son of Veroncia), among others.

People of the New Testament (II) is the fourth volume of the long-awaited “New Light on the Visions of Anne Catherine Emmerich” series. The first part begins with the visionary’s ...
Udostępnij
Prezentowane dane dotyczą zamówień dostarczanych i sprzedawanych przez empik.

A War of Loves: The Unexpected Story of a Gay Activist Discovering Jesus Bennett David
0/5
53,49 zł