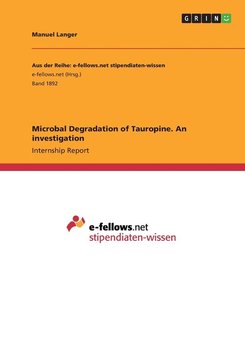 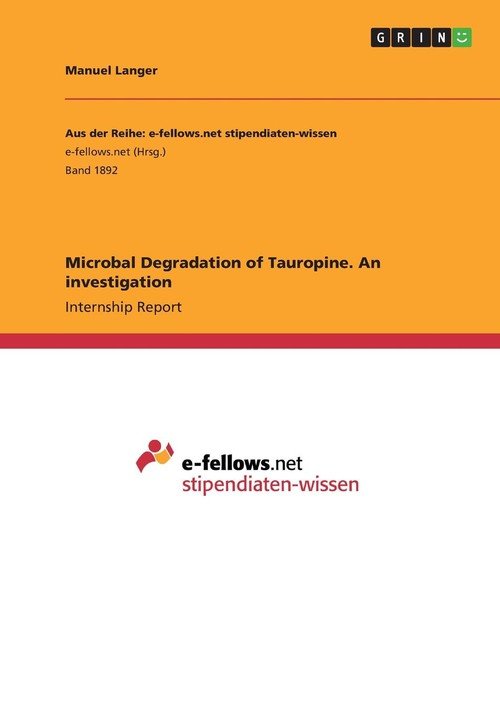 Wysyłamy w 4-5 dni
Internship Report from the year 2015 in the subject Chemistry - Bio-chemistry, grade: 1.0, University of Constance, language: English, abstract: One interesting aspect is the involvement and the relevance of one sole enzyme in the microbial tauropine degradation pathway: the tauropine dehydrogenase. Therefore three main questions were studied. The first was to verify the action of a tauropine dehydrogenase in microorganisms. The second step was to further characterize this enzyme by its molecular weight and its localization within bacterial cells. In addition, the degradation pathway downstream of the potential tauropine dehydrogenase should be clarified. Therefore, in this study, the metabolism of tauropine in four different model organisms was investigated. As model organisms a Ralstonia strain from fresh water was used and in addition three terrestrial bacterial strains were isolated. The metabolism of tauropine in microorganisms is not yet clarified. Tauropine, besides other opines, has also been reported in the context of bacteria. In fact, it was found in plants, which were infected by agrobacteria with a virulent Ti plasmid. The resulting genetic modification leads to tumor formation, and the plant is triggered to produce opines. As plants cannot use opines themselves, the opines serve as nutrition for the agrobacteria and other opine-degrading bacterial strains. But so far, compared to marine animal phyla, the intermediate steps in the degradation of tauropine in microorganisms are widely unknown. Preliminary investigation in marine bacteria like Ruegeria pomeroyi DSS-3 and Roseovarius nubinhibens ISM has shown that they can use tauropine as source of carbon and nitrogen. Sulfate thereby occurs as end product. It is possible, that the tauropine degradation in bacteria is analogous to that in invertebrates. This would mean that a dehydrogenase is involved. If in microorganisms tauropine can be degraded into pyruvate and taurine by a tauropine dehydrogenas

Internship Report from the year 2015 in the subject Chemistry - Bio-chemistry, grade: 1.0, University of Constance, language: English, abstract: One interesting aspect is the involvement and the ...
Udostępnij
Prezentowane dane dotyczą zamówień dostarczanych i sprzedawanych przez empik.