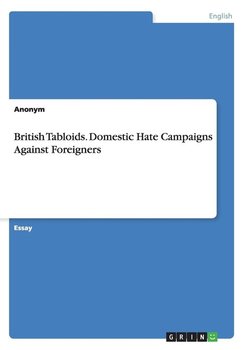 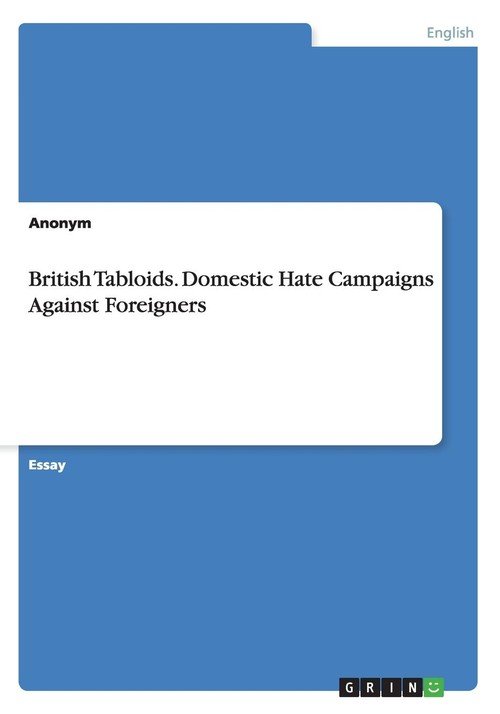 Essay from the year 2007 in the subject English Language and Literature Studies - Culture and Applied Geography, grade: 1,7, Johannes Gutenberg University Mainz (Department of English and Linguistics), course: Culture Studies III, language: English, abstract: The tabloid is considered to be very popular in Britain. It tends to be superficial in its treatment of events and much of its material is trivialized. Due to emotive language, provocative headlines and striking pictures, it catches the mass readership. The popular newspapers never get tired of sensational and scandalous stories. Domestic Hate Campaigns can be regarded as one of the categories that the tabloids promote. How can we recognise a Hate Campaign and what do the popular newspapers intend with such Campaigns? First of all, a Hate Campaign can be very successful and influential over a period of time because of its continuous reporting about a certain topic. Due to this, people are constantly confronted with one and the same topic in which they start to believe by and by. Secondly, it is obvious that a Hate Campaign works against a certain group of people who are different from the majority of people. To such minority groups belong foreigners who can be divided into immigrants and asylum seekers or refugees. In general, immigrants are people who decide to settle down in another country in order to get a better job or to improve their living standard. Asylum seekers are people who seek refuge in a foreign country in order to escape persecution, war, natural disaster or famine. Moreover, everyone has the right to seek and enjoy asylum because it is a fundamental human right. Hostile media coverage of asylum and refugees undermine the lives of those who had to suffer in their home country. Is it really justified to say that Hate Campaigns against foreigners reinforce xenophobia in Britain and incite the British population against immigrants and asylum seekers?

Essay from the year 2007 in the subject English Language and Literature Studies - Culture and Applied Geography, grade: 1,7, Johannes Gutenberg University Mainz (Department of English and ...
Udostępnij