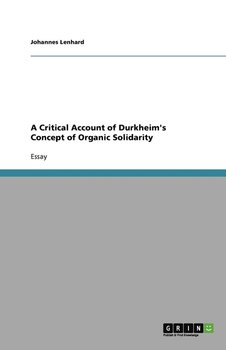 A Critical Account of Durkheim's Concept of Organic Solidarity 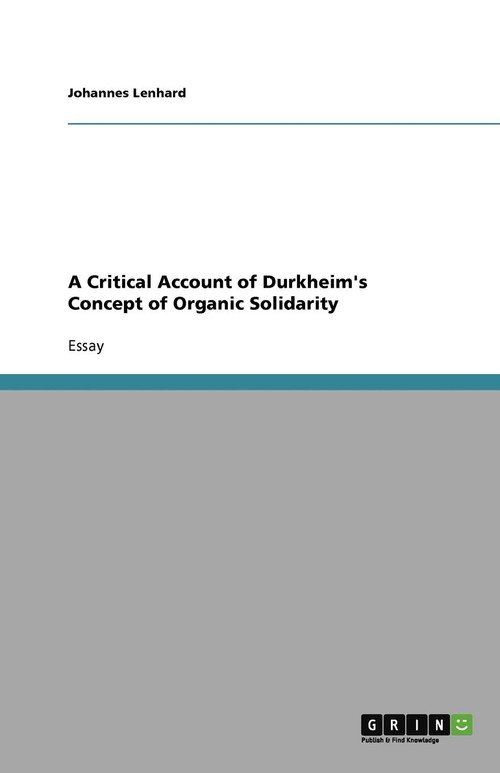 A Critical Account of Durkheim's Concept of Organic Solidarity (sewn)

The best practicable constitution (polity) and Aristotle's justification of this constitution over his real preference for aristocracy
Lenhard Johannes Obcojęzyczne | sewn
49,99 zł

How would you analyze the Swazi Ncwala?
Lenhard Johannes Obcojęzyczne | sewn
41,49 zł

Wysyłamy w 4-5 dni
Essay from the year 2011 in the subject Sociology - Classics and Theoretical Directions, grade: Distinction, London School of Economics, language: English, abstract: Durkheim followed one central question during his writings, namely the search for the "bonds which unite men one with another" (Durkheim, 1888: 257). Especially Durkheim's early works are concerned in this respect with the forms of 'solidarité' that are specific for pre-industrial or lower societies in contrast to the ongoing industrialised or organised kind of community. In the 'Division of Labour', Durkheim arrives at a rather pessimistic account of modern, industrial society: although under 'normal circumstances' the division of labour leads to a harmonious society bound together by solidarity, our current form of industrial organisation is in an "appaling crisis" (ibd.: 339) composed of "organs that still clash discordantly together" (ibd.: 340). It is this account Durkheim gives of solidarity in the modern society that can be criticised substantially. The following essay will therefore consist of an analysis of his line of thought that leads him from early societies bound together by what he calls 'mechanical solidarity' based on similarities, to the notion of 'organic solidarity' in the 'contractual society'. Especially his optimistic, evolutionary account of the development of solidarity, his use of empirical data and finally his idealised notion of society are possible points of doubt as will be shown. The concluding remarks will lift Durkheim's analysis from the early 20th Century to a contemporary account trying to extend it with Foucault's 'penal society'.

The best practicable constitution (polity) and Aristotle's justification of this constitution over his real preference for aristocracy Lenhard Johannes
0/5
49,99 zł
premium

How would you analyze the Swazi Ncwala? Lenhard Johannes
0/5
41,49 zł
premium